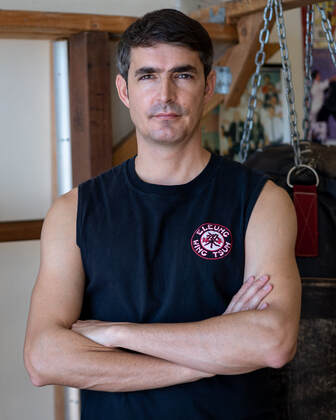 Sifu Matyas Tamas came across Wing Chun back in October 2007 when he was looking for a form of self-defense or a practical martial art. Upon learning that this was the style that Bruce Lee practiced before becoming a famous martial artist, he decided to find a Wing Chun school in San Francisco or the Peninsula.
After taking his first trial class on a Sunday morning in Millbrae, CA, Matyas signed up without hesitation to become Sifu Elmond Leung’s student. He started attending all weekly practices of the school and his Sifu, and a few months later added 2 more classes per week at the Chinatown location taught by Sifu Elmond and Matyas’ Sihing, Sifu Joseph Mah.
During his first two years, Matyas already developed a great passion for Wing Tsun kung fu, and recognized his Sifu’s masterful skills and knowledge.  He was eager to follow his Sifu’s footsteps and progress as quickly as it was possible, adding  more hours of individual weekly practice in the park nearby to his house.
Starting his first year, Matyas attended all local Wing Tsun seminars of the International Wing Tsun Association (IWTA). He greatly appreciated the opportunity to meet and follow instructions of  Master Carson Lau from Toronto and Grandmaster Leung Ting from Hong Kong during these seminars.

Very soon, Matyas also discovered the joy of teaching and sharing the art with his younger kung fu brothers. He was always glad to assist his Sifu by partnering up with the newest students whenever it was needed. Matyas was one of the students representing Sifu Elmond Leung’s schools in the Bay Area’s annual Chinese Martial Arts Tournaments starting 2011. Together with his kung fu brother, Brian Chung, they trained intensively for weeks on multiple occasions under the watchful eyes of  their Sifu to prepare for sparring kung fu competitions. They both had won medals for their schools making their classmates and Sifu proud.  Because of Wing Tsun and the schools’ events, Matyas also became interested and learned about photography, becoming an amateur photographer in order to document and contribute with photos.

​In 2013, when a couple high profile Wing Tsun schools from North America became independent from the  IWTA, Sifu Elmond Leung also retired from the association. Matyas followed his Sifu and helped him establish ELeung Wing Tsun in Millbrae, and became his instructor.
During the time of Sifu Leung’s medical leave from teaching in 2015-16 Matyas filled in the void and ran all classes of ELeung Wing Tsun in his Sifu’s absence but with the help of his supporting guidance.
In 2017 Sifu Elmond Leung was able to return to the classes and appointed Matyas Tamas to Sifu.
Sifu Matyas had his first two students follow his competing footsteps in August 2019, when they participated in the 11th ITKFA Chinese Martial Arts Championship in Concord, CA. They both had a great time training for the tournament  and enjoyed competing with good results. ELeung Wing Tsun’s classes were relocated to Burlingame the same month.